Unlike what most people share with me about having regular writers’ block, I am someone who usually doesn’t know when to say, “Enough!” I’m usually paring down what I’ve written. I’m one of those people that just doesn’t know when to shut up, at least when it comes to writing. I have a tendency to WAY over-write, then have to go back and hack off enormous chunks of writing details that are simply SUPERFLUOUS!

Why am I like that?! What is it about me that makes me ramble on, thinking I’m making the story better, when in reality, I’m droning on about stuff that not only doesn’t need to be included, but actually makes the content weaker? I have no idea!

So, after giving it a lot of thought, I’m doing something I’ve never done before on one of my stories. First, I’m in process of going back to hack away at the unneeded “stuff”, and then I’m concluding the story with… are you ready… only one volume. In fact, the word VOLUME won’t even be on the cover. It will simply be: 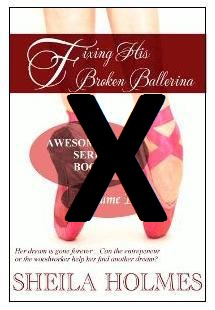 Fixing His Broken Ballerina (That’s it! No More!)

Making this story complete within the one book means that I need a new book cover, too. The one that’s been displayed for weeks now on this blog is no longer relevant. So, within a day or so, I hope to have the new cover here on display.

I’m so excited! That means I can finish out this story, and get going on the one that is “bubbling around in my head.”

Yea! I just love it when a plan comes together!

Should have the new cover in a couple of days! Hurray!