Often times lying awake at night, my current writing-endeavor comes to mind. Usually it is in the form of “throwing in” new circumstances that, while not really adding to the plot, they add a large dose of one of the following: humor, improbability, or deep emotion.

The interesting thing was that the story had a really solid plot. I found that as I read, though, I kept getting frustrated. The pattern never changed. And, as a result, although I finished the story, instead of giving a rating and review, which would have had to be very, very bad, I just didn’t write anything. I moved on and ordered a new book. (Now, I’m beginning to think I did the author no kindness. Perhaps I should have taken the time to kindly address his boring writing style pattern, while encouraging him to continue to write.) 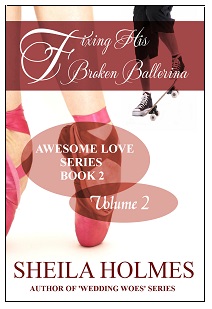 While I decided, after completing the scenes in my mind, to not include the segment, I wanted to share the picture that inspired the possibility. I was going to bring a pregnant ballerina into the “mix”, who wanted to purchase private studio time. In my mind, at least, what happened during this segment was hilarious! I thought it would just be hysterically funny! In my mind, it would add warmth, humor, and prevent my novel from becoming glorified “journaling”.

The more thought I gave it, though, I decided that even though I could easily wrap it all within the plot, it would just delay things. I am so excited to have this novel released and some things just had to be left out.

So… after all the minutia above, know that the novel, Fixing His Broken Ballerina: Volume 2, will be released shortly, minus “the pregnant ballerina” segment.

So close to release… so very, very close!