Learning Grace to Write About Grace 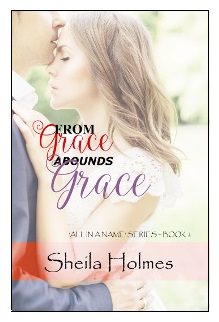 I am forever amazed at the life lessons I learn as I write. They come about in strange and interesting ways and ALWAYS affect my writings.

Recently I began writing a new novel called, From Grace Abounds Grace. Short of just starting in with the story blurb here, I have something even more important to share this time.

Several days ago I went for lunch and Christmas shopping with my daughter. We were having a glorious time laughing, eating, sampling Christmas goodies, and buying gifts for those we love so dearly.

In one of the stores, we had made the store circuit and were preparing to leave. But, I realized I couldn’t find my sunglasses. So maybe you’re thinking I should just admit they were gone and move on with my day. But, my poor pitiful eyes can’t take the sun. They’re very sensitive to light!

When I couldn’t find them, I decided to remove item by item from my purse, hoping they had just gotten buried deep inside.

My wallet was the first item out, and I simply laid it on the product counter behind my purse. When I then reached my hand back into the deep recesses, I found the sunglasses. Thrilled, I simply zipped up the purse and left.

At least an hour later at another store is when I realized my wallet was gone and that I’d left it at the prior store. So, without even paying for the new items at the new store, we dashed back to the prior store.

My wallet was gone!

As I was dreading the next steps of going home and beginning by phone to notify my credit card companies and the DMV, my daughter walked up to one of the cashiers and asked if anyone had found a lost wallet.

I noticed immediately that the cashier was acting strange, making strange remarks, and not looking at my daughter or me in the eyes.

However, the other cashier turned and said, “Oh, you’re the one that lost it?” When we confirmed, she called the manager, who came up and unlocked the safe and gave me my wallet.

I remember the first thing I said was, “Thank you, Jesus.” As we left, I turned around to again thank the manager and two cashiers, the one cashier still wouldn’t look us in the eyes. Very strange!

After going back to the car to return to the second store, where our selections were still in a stranded cart, having never been purchased, I rummaged through my wallet to find the $70.I was carrying to make the final purchases.

Lo and behold… the $70. was gone! (Sooo grateful everything else was inside.)

My first reaction was frustration and wondering how someone could do that. But, the Holy Spirit immediately reminded me that I was a sinner too, and my only difference perhaps was that I had been saved by God’s Grace. So, I asked the Lord to forgive whoever took the money, and bring something miraculous out of the whole thing. And, I asked Him to do something wonderful with the stolen money that would bring Him Glory.

I was actually learning to show grace, because I’d been shown God’s Grace. I think this will help me understand grace better and portray that grace from God better in my current novel.

Rambling??? Perhaps. But, what I know for a fact is that everything I learn from God’s personal Grace shown to me affects my story in From Grace Abounds Grace.